In 1990 I was working in the downtown area in Flint, Michigan. I was at the Genesee County Drain Commissioner’s Office, very near the county court buildings. The day was extremely cold and windy, but I decided to take my morning break outside. I wanted to walk around the building to clear my head and get a break from the clamor inside. My morning had been extremely busy and noisy, with phones ringing and everyone in the office talking at the same time.

Freezing weather always makes the telephones ring at the Drain Commissioner’s Office. Sewer pipes have a perverted sense of humor and lie in wait for the coldest days. Then they decide to spring leaks and flood streets with their contents so they can watch us mortals slip, slide and dent our fenders. The maintenance department people are aware of this, and they swear that it is indeed an intentional thing on the part of the pipes.

Lawyers are very common in this part of downtown, coming and going to the court building. While outside, I saw yet another “up and coming” young lawyer waiting for the light to change so he could cross the street. He was probably in his late 20’s, clean cut, and impeccably dressed. His navy-blue designer overcoat must have been fresh from the cleaners. His two hundred dollar shoes glistened with polish. His briefcase was also expensive, probably a graduation gift from Mom and Dad for passing the bar. Soft leather gloves covered his hands. 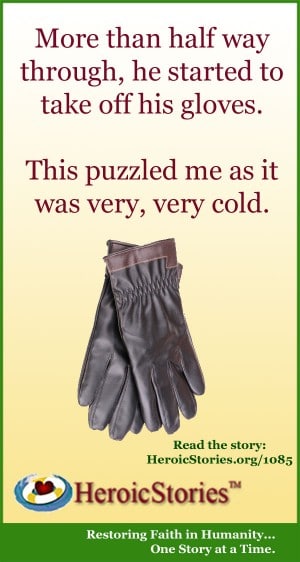 The light changed and he proceeded to cross the street. More than half way through, he started to take off his gloves. This puzzled me as it was very, very cold. Then I saw another man in the crosswalk, obviously down on his luck, crossing from the other side, walking with metal crutches. He had no gloves to protect him from the frozen aluminum. The lawyer paused momentarily in front of the man on crutches and handed him his fur-lined gloves. They both smiled and kept walking. The whole exchange lasted no more than two or three seconds.

Yes, the lawyer won my respect, but I also truly admire the man on crutches. He not only had the good grace to accept something he needed, but also did so cheerfully. He did not protest or argue with the generous giver, instead simply smiled, said thanks, and continued on his way. It is just as important, if not more so, to accept the gifts we’re given graciously as it is to be the giver of gifts.

Whenever I need a lift, I just recall this story. It always cheers me.