Dad’s life seemed typical of his generation. He graduated from high school during the depression and worked for a large corporation. He enlisted in 1941, served in the Pacific and Europe.

With we three kids on our own, Dad and Mom retired to the Florida panhandle. Two years later Mom died, in 1990.

Northwest Florida has no palm trees or yachts. It’s semi-agricultural. Education is often a luxury, with attendant illiteracy. Dad rattled around his house, tried golf and failed to see why some become addicted, then saw an ad requesting literacy volunteers.

Dad helped a prisoner learn to read, a parole requirement. He helped another man learn to read because his literate wife was going blind. Then he found his true calling.

Dad began as a volunteer teacher’s aide in a third grade class, helping children with spelling and grading papers. He graduated to the fifth grade, helping with spelling and math. Again Dad graduated with his class into sixth grade. As the school converted to departmental teaching, Dad assisted the math teacher.

We kids only knew what Dad told us. During chilly winters he lamented unfortunate kids in just T-shirt and shorts. He was saddened by children with nothing under the Christmas tree. He loved the kids and school and hated summers, so he tutored. 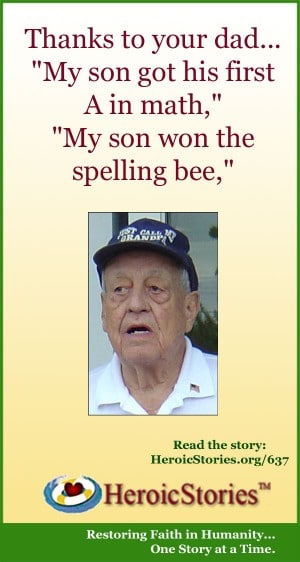 Called “Grandpa”, he even wore a hat emblazoned “Call Me Grandpa”. He said the kids kept him young.

At eighty eight, after ten years commuting 30 miles to school in his sputtering 1979 Chevy, his legs weakened. He was admitted to a Rehabilitation Center for physical therapy to improve his muscle tone. One spring afternoon during a nap, he passed away peacefully.

At his memorial service, his students eulogized him with a 15-minute video tribute. They compared him to George Bailey in “It’s a Wonderful Life” for the 1200 student lives he touched. He inspired “his kids” to learn.

At the reception we heard: Thanks to your dad… “My son got his first A in math,” “My son won the spelling bee,” and “My daughter won the citizenship award”. Plus, none of “his kids” came to school in winter without at least one pair of pants, a warm shirt and jacket. Nor did Santa miss any house, despite Dad’s fixed income.

He received numerous awards from the State of Florida, the county and schools. The Chamber of Commerce named him Citizen of the Year. We found newspaper clippings and video tapes of TV interviews.

His work was done without fanfare, from the richness of his heart. I hope to live as long, die as peacefully and leave half the legacy. I also hope his life inspires you as it has me.