Many years ago I was driving along a desolate stretch of highway late one night when something odd happened to the electrical system in my car. It continued to run but the headlights, tail lights, *everything* all went out and wouldn’t come back on! I probably should have simply pulled over to the side of the highway then and waited for morning but I had no assurance that once turned off, my engine would ever start again. Besides it had only been a few weeks since Michael Jordan’s father had been killed while sleeping at a rest stop not one hour from where I was at the time so I was a little nervous about the idea of spending the night alone on the roadside. In any case, I elected to just keep driving, or creeping rather, taking care to pull way over on to the shoulder every time the occasional car overtook me in my lane.

This went on seemingly forever until one car passed me in the left lane and then slowed to match my speed. That scared me a bit but with Mr. Jordan’s lethal encounter uppermost in my mind I determined that no matter what happened, I wouldn’t stop the car. Instead I continued resolutely on, trying to ignore both the other car and the butterflies in my stomach. Far from trying to force me off the road though, the person (people?) in other car simply slowed down until they were even with the driver’s side rear door of my car and then switched their headlights to high beam. Suddenly I could see again!! The borrowed light from the other car allowed me to see the road well enough to gradually pick up speed until we were cruising down the highway side by side, as easy as you please.

And it *was* easy. Its hard to describe how peaceful the night became once I could see it with secondhand sight. I remember noticing that there were fireflies blinking in the fields next to the highway, that our tires made a pleasant sort of high pitched humming sound, and that the air smelled of warmth and damp even though there was a cool breeze coming in the window. Every now and then another car intruded on the peace, but when it did my “seeing-eye car” simply dropped back to pull in behind me before resuming its self-assigned place beside my rear door. 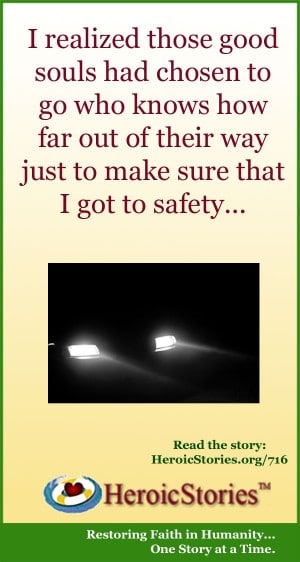 We traveled that way for over an hour and a half. Passing exit after exit without an open service station I wondered how long it would be before my mysterious hero(es) would have to leave me to continue my way alone. But they never did. When I finally found an exit with an open truck stop I pulled off, waving my arm out the window in thanks. But the car followed me up the ramp! Expecting that I would finally have a chance to say Thank You in person, I was surprised when the other car passed me without stopping, turned across the overpass, and then reentered the highway going back the way we had come! It was only then that I realized those good souls had chosen to go who knows how far out of their way just to make sure that I got to safety — and with no thought of thanks, reward, or even recognition. To this day I don’t know how many people were in that car, or even what kind of car it was — I never got a clear look at it.

I have never forgotten it though and my only hope is that whoever you are, you are reading this story now and will accept my long overdue thanks for getting a total stranger home safe and sound. You’ll always be my hero.