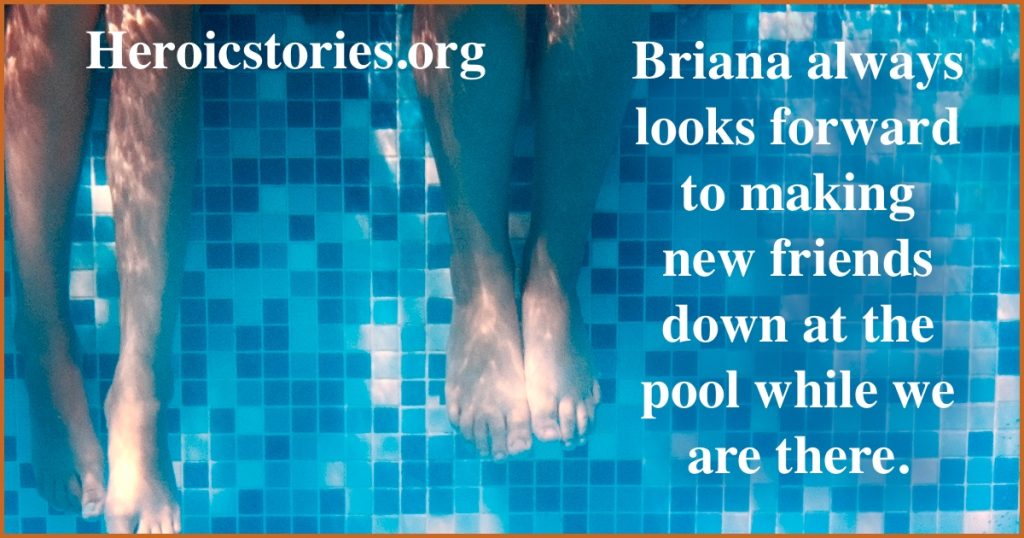 My 8-year-old daughter Briana and I try to visit my mother in Florida every summer for at least a week — even though it’s hotter there than where we live in New York. That’s where we were in August of 2004.

My mom’s condo has a huge pool framed with palm trees on the Intracoastal waterway, so of course there are always a few children splashing around in it. Briana always looks forward to making new friends down at the pool while we are there.

The first day we were there, Briana and I walked to the pool hand in hand. I picked a lounge chair that had a full view of the pool and sat myself down to read a magazine and sun myself. I watched out of the corner of my eye as Briana, an excellent swimmer, swam around by herself.

Then at one point, I looked up and saw her gesturing to another little girl around her age. As they played together in the pool, diving under the water and laughing, I saw them gesturing to each other again and again. I assumed the girl was deaf.

Soon the girl offered a bag of potato chips for Briana to share. Briana then motioned to her to follow her to the drinking fountain. The whole afternoon was spent with the two girls gesturing and laughing together.

Even though other families had come to the pool with children near 8 years of age, the other kids had all stayed in the shallow end. Because Briana’s new friend was also a very good swimmer, they were able to swim together from one end of the pool to the other.

I smiled to myself that my daughter always found it so easy to make friends, no matter where we were or what the circumstances. They played with each other and with the girl’s brother all afternoon in the hot Florida sun.

When the sun began to set families began to leave the pool area. As we got ready to go and Briana was drying off, I asked her if the girl was, in fact, deaf. She replied “No,” the girl was on vacation from Russia and didn’t speak any English.

The two girls played together the whole week we were there, laughing and gesturing and making themselves understood. I was so proud of my daughter, and thought how the world of adults might imitate their example. Instead of letting a little thing like language keep them from making a friend, Briana and this girl enjoyed a week together by making up a “language” they could both understand.

1 thought on “A Language of Their Own”