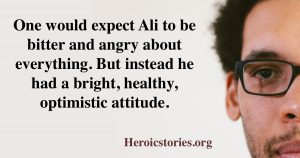 I remember the first day I saw Ali. It was during the first week of a Computer Science course I was taking in Iran. I lived in Iran for a few years because both my parents are Iranian and I wanted to learn more about the culture.

When I was in class, I usually pitied myself. I did not know the language well enough to understand. I had a hard time reading anything written in Farsi, let alone deciphering the professor’s illegible scrawls. I noticed a student sitting the front row. He asked the professor several times to read what he had written on the board. It seemed odd to me. He was able to see well enough to do most things, but could not read the large letters on the blackboard just a few feet away.

I learned that his name was Ali. He had a rare disorder known as Leber’s congenital amaurosis, which caused his eyes to jiggle. It meant that he could only read white text on a black background, and only with a large magnification. Even then he couldn’t read for long. He had difficulty seeing other things and at night his vision was much worse. He was able to stay in college because he had friends who would study with him.

Living in Iran with an impairment is far more difficult than in a Western country. Most buildings do not have wheelchair accessible ramps. There is no closed captioning in television programs, and I haven’t seen Braille anywhere. Ali’s difficulties would seem insurmountable to anyone else. He could not afford to stop paying attention in class for even a second. Often, professors were very unsympathetic about his condition and did not give him the accommodations he deserved. Yet his grades were often the highest in the class.

After seeing how difficult it was for him to study, and how happy he was in college, I felt ashamed of my self pity. I often had to ask other students what the professor had written on the board, but that was nothing compared to how hard it was for Ali. For once, I didn’t feel like all the odds were stacked against me.

One would expect Ali to be bitter and angry about everything. But instead he had a bright, healthy, optimistic attitude. He loved life and didn’t take things for granted. He often went out of his way to help others, and never expected anything in return.

It’s no wonder his friends were willing to help him with his studies. They never complained. They would help Ali study for a final exam in a class that they themselves were not even taking. And through all this, Ali was helping his friends, too: he was teaching them how to be heroes.