by The Crone
Ohio, USA 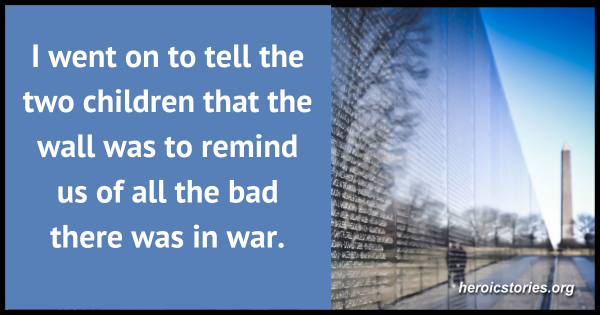 I just got back from Washington, D.C. I finally made it to The Wall — the Vietnam Veterans Memorial. Right away someone asked me for help looking up a name. I helped them and then found my first husband’s name. I found the stone where it is carved, found his name, and sat there crying as I listened to the inane comments from and indifference shown by 99.9% of the people simply walking past it. They didn’t even pause to ask, “I wonder how old he was? I wonder how he died? I wonder if he left a family at home alone?”

Shortly thereafter, the same family turned up again. “We had a question and we thought you might have the answer. What if someone didn’t die right then and there, but did die as a consequence of being wounded there. Would he be on the wall?” I told them I believed he would be. I went on to tell the two children that the wall was to remind us of all the bad there was in war. I spoke of how trying to prove things to “the other guy” just because we are stronger doesn’t make it right, and how bullying and fighting and conflict starts in school and even at home before we start school. And I spoke, and the children agreed, of how we learn how to act more by watching than from being told.

I said I was going to tell them a secret, one which they would realize in a couple of years anyway but I wanted them to think about now: We only get so angry and upset with people we care about — parents and brothers and sisters and special friends. If someone we don’t care about does things, we don’t let that bother us. And then I told them we all have the right to ask for hugs, and the more we give the more we have to give, and how they lift problems from our shoulders, lighten the job we’re doing, just generally make life easier to get through. And the children listened and understood.

Am I setting myself up as a hero? No. The heroes are the parents who brought their children to the toothless old crone (that’s how I look now, I’m sorry to say) to talk and share with them. Especially the mother, who came back later to ask if she could take my picture, something to remind each other of “the lecture on hugs.” I, of course, consented. I reminded her that we all tend to forget to say nice things to each other when we get a chance, and if the picture helped I’d be happy indeed.

It took nerve for her to come back; her husband apparently tried to dissuade her. But she believed the family would benefit if something as simple as a picture could be taken out or looked at to remind everyone of how important caring and sharing and hugs can be.

Originally published as HeroicStories #163 on July 28, 2000
Available in The Best of HeroicStories, Volume 2.