I was on the shoulder of a busy tollway in the Chicago metropolitan area, looking in the trunk for my tools and spare tire. I had changed tires before — that was no big deal — but I was worried about being accosted by another person while stuck on the side of the road, or being hit by a passing car.

As I bent into the trunk, I heard a man’s voice from behind and to my left. I have no idea what he said, because when I heard his voice I screamed, jumped over the guard rail, and ran toward the nearest building. After a moment I realized he wasn’t following me, so I turned to see what he was doing.

That’s when I saw the van full of Boy Scouts parked in front of my car. And I saw the voice: their Scout Leader, a man in his mid-40s, removing the spare from my trunk to fix my flat! As I timidly walked back, I could hear him speaking to the boys, who by now were standing behind the guard rail. 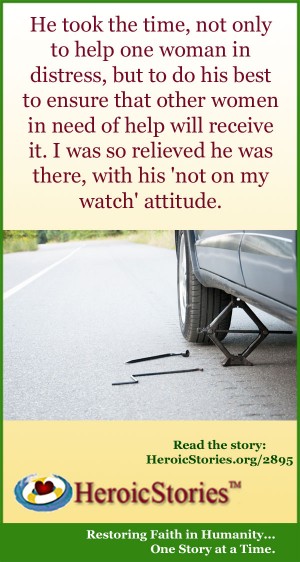 “See, boys,” he said to them, “this young lady is terrified, and for good reason. Thousands of young women are attacked every year. Last month a girl was killed on Route 88 when her car broke down. It’s dangerous to be a young woman alone in this world. She did the right thing running like that. This girl will NOT be found dead in a forest preserve, not if we can help it.”

He told the boys how they, as men, are responsible not only to treat women with respect, and as equals, but also to watch over and protect them. He told them that if they see another man harming a woman, they have a responsibility to try to stop him, or call the police. Once he made that point, he gave step-by-step instructions on safely changing a flat on the side of the road.

Now, I don’t know what the Boy Scout definition of a Scout Leader is. This man displayed the epitome of everything I’d want taught to my son in Boy Scouts, or anywhere. He took the time, not only to help one woman in distress, but to do his best to ensure that other women in need of help will receive it. I was so relieved he was there, with his ‘not on my watch’ attitude.

That Scout Leader may have saved my life that day. I’ll never forget his mentioning the murdered girl, because I was thinking of that same incident. Who knows if the next person coming down the road wasn’t the one who killed that other girl?

Those boys learned a lot that day, and so did I. I’m so grateful there are still honorable, decent men out there. I witnessed one, teaching our youth to be honorable and decent, making the world a safer place for women, for our daughters, for everyone.

3 thoughts on “Not On My Watch”