We were in our 20’s, with two small children — our ability to take a vacation constrained by a very tight budget. Many times in the 1960’s and ’70’s we returned to New York City from vacation with just enough gas and no money for tolls. But one vacation in 1966 almost ended on our way north from NYC.

The car stopped suddenly around midnight on the New York State Thruway. We coasted to the side and discussed our next move. My NYC born-and-raised husband had only driven for about a year, and had no clue why an engine would die.

I dug a flashlight out of the camping gear, and we both looked under the hood — blankly. Just then a trooper stopped. He called a tow truck, which arrived after an hour. The trooper stayed, gently breaking the news that it was probably the alternator, about $70 to repair. We had the cash — but had planned to spend under $100 on our two-week vacation. I’m certain my face mirrored my husband’s stricken expression. 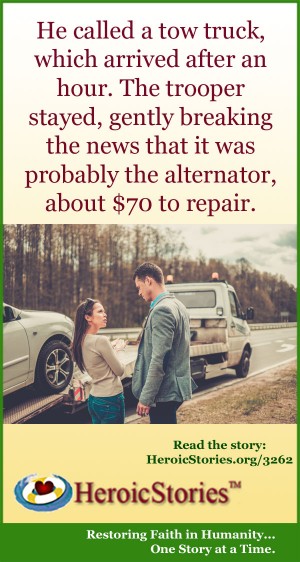 The trooper left after the tow truck arrived. The 50-ish driver owned the nearest gas station, in Saugerties, New York. When we arrived, he decided to work on our car, “since your kids are asleep and I’m awake”. We moved the kids into sleeping bags, then they and I slept on the two tired sofas in the station. Thus I’d be awake enough to drive whenever the car was ready — back to the city, of course, since we’d be broke. My husband followed the owner into the garage to learn something about cars and engines.

When my husband woke me, I reached for my purse to pay the bill. But the station owner insisted that my husband had done most of the work. He would accept only $10 for parts. I drove north, both of us happy that the vacation could continue, though we’d have to pinch pennies for a couple of weeks.

Whenever we were in the area for the next seven years, we stopped at that gas station: for gas, to get a taillight fixed, whatever. The station owner always remembered us, and exclaimed over how much our sons had grown. Before we moved to the Midwest, I insisted I must pay him the old alternator bill.

He laughed and said it had been paid many times over because we always stopped in. Moreover, the trooper had alerted him to our dilemma and paid half the bill. Our $10 kept his portion to his labor charge. We all laughed as he related how hard it was to invent the white lie about my husband’s help.

Ever since, our two grown sons, my husband, and I all stop for stranded motorists and use our cell phones to call help. Sometimes our cash pays for towing. Remembering the night we were almost penniless, we’re simply honoring the gas station owner and the trooper who taught us the true meaning of interdependence.

4 thoughts on “Saved by a White Lie”