In the long queue of beggars outside the temple in New Delhi, a tall, robust man in his forties caught my attention. His attire was neat and clean, unlike the tattered, dirty clothes others wore. Most of the beggars greedily took the various eatables offered by the devotees and begged for money. This one declined all eatables, but accepted money without begging for it. He was always to be seen from 6 to 9 in the morning and 7 to 9 in the evening.

One morning, I was following a young man who was doling alms. When he saw this beggar, he sneered at him, and said,” Don’t you feel ashamed of yourself to be among these people? You are capable of earning, but you have chosen to earn easy money. No one should give you even a paisa.” This man simply smiled and gave him his blessings. 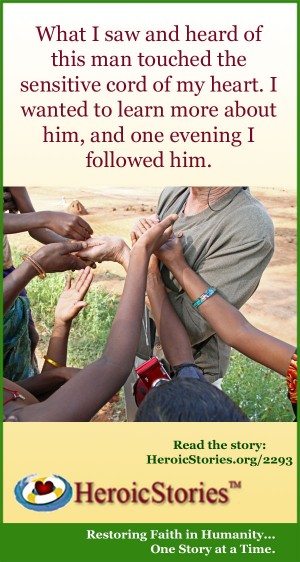 What I saw and heard of this man touched the sensitive cord of my heart. I wanted to learn more about him, and one evening I followed him.  He headed to a jhuggi (dwelling) in a slum area.  On his way to his hut and through the slum, he was enthusiastically greeted warmly and respectfully by one and all. I thought the best person who could tell me more about the beggar was one old man who had blessed the beggar on his way.

The old man told me that the beggar had lost his wife some years back, and had no children of his own. He was well-employed and wanted to serve the slum dwellers of the area. He decided to start begging, and chose the temple as the ideal place for this. The group of beggars at the temple resisted his entry into their domain, but his humility and persuasion made them yield. He told them what his plans were. Whatever money he collected, he used to educate some of the intelligent students of the area. In fact, he got three girls and two boys admitted to public schools of repute, and financed their education. Two are in college now.

Every evening a group of about 20 children belonging to poor families comes, and he takes dinner with them. Twice a month, he takes them for a picnic. He would never admit it, but he contributes his own earnings to this philanthropic service. Only last month he helped out financially towards the marriage of a girl of a poor family.    The old man paid a most deserving compliment to this man. “There is a God inside that temple, and there is a God outside that temple, sitting among the beggars!”