After a week in San Francisco, my husband and I were on the way to the airport on a shuttle bus with 20 other people. Four of us had flights to catch and the rest were returning to their hotel. We had a little more than two hours before our flights — not an excessive amount of time in today’s’ heightened security environment.

Two miles south of the airport the bus pulled over to the side of Highway 101. We had no idea why we stopped until the driver opened the door and we smelled burning rubber. The front tire was completely gone and she had been driving on the rim. Her skillful driving meant we had been unaware there was a problem.

However, there we were, stranded on the side of the freeway in rush hour. Our driver called the company on her cell phone, but there was no time to dispatch another bus from the city and reach the airport on time. 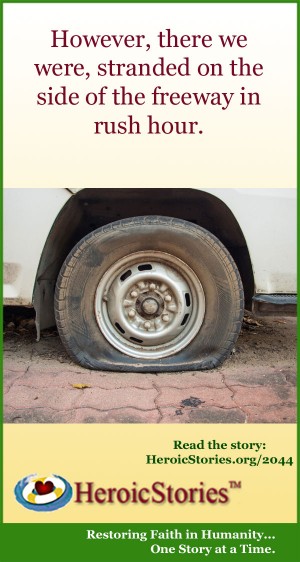 As we were running out of options, a taxicab pulled off the highway. When he learned our situation, the driver offered to take the four of us to the airport. I thought, as he stuffed our luggage into his voluminous trunk, “Now here’s an entrepreneur. He saw an opportunity to make an extra buck and he took it.” We were all so happy he stopped we would have paid whatever he asked.

The shuttle coordinator offered him money so we would not have to pay the fare, but he wouldn’t take it. Once we were on our way he announced he was not going to charge us. “I was on my way there anyway.” He went on to tell us he had been driving a cab for 30 years and this was not the first time he had been in this situation. I told him he was a “mensch” and asked him if he knew what that meant? He only knew it was a Yiddish word. Roughly translated, I explained, it means you’re a human being, the finest specimen of human being.

Since he didn’t want to charge us, I asked him for a card so I could write a thank you and send a copy to his boss. He did not have one, but wrote his name on a receipt that had the name of his cab company. Unfortunately, after I was in the terminal I realized the receipt had no information on it except what he had written: “Michael Gariglino, Cab #972”. By the time I realized this, it was too late to learn the taxi company name.

Since I can’t send him a letter, I’ll send it to the world: Thank you, Michael, for rescuing us. You made sure we got off the freeway safely and caught our flights. Best of all, you reminded us that even with the stresses that fill our world today, sometimes we get the privilege of meeting a mensch!