It’s interesting the things that bring people together.

A few days ago we had what some termed a “super blood moon” – a confluence of a full moon at its closest position to the earth coinciding with a lunar eclipse. It was a rare event that won’t happen again for 18 years. 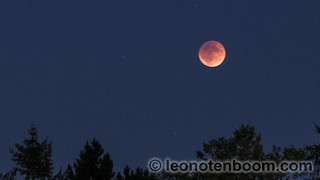 It was especially rare in our neck of the woods, too. Here in the Seattle area it seems whenever these celestial events happen they include cloudy skies to make it a non-event at least locally. This year, however was different.

The blood moon itself was cool, and I’m glad I was able to see it. What was almost as interesting, however, were the people gathering at various vantage points near our home (we live on a bit of hill). Everyone was looking and chatting and when the final “I see it!” went out, all were quickly pointed at the rising sliver over the eastern horizon.

It may not seem like much, but … people come together. In times of crisis, in times of joy, and even just in times of “interesting things happening”. People naturally come together to share the experience with one another … or just to get pointed in the right direction.

Have you helped anyone lately by pointing them in the right direction?

A stable roof over two young girl’s heads is not a small gift.

Butch/Texas says: I know a little of how she feels. Never went to 1 school 2 years in a row and never lived more than a year on one home till age 46. I even worked on research ships so I could travel and always be gone. May have missed some things in life but sure had a lot of adventures. Home is where you make it I guess.

Cathy Gill adds: WOW! Never in a million years did I expect that ending to the story. How marvelous that the landlady was so kind to provide a box of goodies instead of an eviction notice and that she continued to do that for years afterwards. There are good people in this world and it is so refreshing to hear about them. Daily news is so utterly depressing and I love Heroic Stories for it’s uplifting news! Thank you!

Lynn shares: Man, that one really hit home, no pun intended. My family moved 17 times before I was 16, and those are only the ones I can remember. I’m 59 now and that “not belonging feeling” still affects my life every day. We weren’t fortunate enough to find that landlord that would let us continue to live there instead of evicting us.

One of Those Days

Sometimes a horrible day can end with an unexpected gift of kindness.

Alain Fontaine says: This story is really great! It made me think of “The Chain of Love”, which I keep thinking, every time I hear it, that it should be named the official song of HeroicStories.

Cathy Gill addss: How delightful that a single hard working cashier took the time to put some money in her pocket to help someone that was short and that one lady that she helped also went back and remembered her for what she did and gave her some of her money to carry on the tradition. We have good people in our world and it is so nice to hear about them. Reading the paper is so depressing because there is seldom good news in there. The newspapers focus on all of the bad news almost all of the time. I love watching local morning news shows because they report the bad stuff generally, but they also devote sections of their newscast to good news clips and not just one. We need more uplifting news every day in our lives and I love to read Heroic Stories because their news is good news, all the time.

You Are Not Alone

Two young women unknowingly help each other after the death of their fathers.

Kaye says: Doris knew that the best way for anyone to deal with a loss is to help someone else deal with theirs.

Kelly Boyd shares: I know a young man of 35 who is a paraplegic and an inspiration to me, because he never complains or feels sorry for himself. He is grateful that he has the use of his arms, unlike quadraplegics, and many times I tell myself that if Jerry (not his real name) can have such a good attitude, so can I. Doris knew the value of looking outside yourself and your own troubles, and made the effort to pass that along. We all need such people.

A Most Unexpected Gift

Sometimes it really IS the thought that counts, because the gift is, well…?

Michael K says: Throughout history those with the least seem to be more aware of what generosity means. Giving away his most prized possession showed that he understood your sacrifice and caring. Your kindness is appreciated. I’m sure you have continued your generous ways. “We can’t help everyone, but everyone can help someone.” – Ronald Reagan. It seems that particular type of largesse used to be more common back in the day. While sitting with my seized motorcycle just south of Baltimore at 3 AM a “hippie” van pulled up with folks that would have liked to help. They had no tools, no trailer and no room. After a few minutes of discussion they started to pull away, stopped, then tossed me a “recreational” cigarette. They really did want to help and that was how they showed it.

Graham clarifies: Note to people outside Southern Africa: “dagga” is the word for “marijuana” down there!

Cheryl adds: I laughed – and cried. What a marvelous story. Thanks so much!

The brotherhood of fire fighters knows no boundaries.

Cappy Cross says: I love all the stories I read on Heroic Stories, but this one immediately brought tears of joy to my eyes! I spent 10 years as a Technical Services Manager for a 7 city regional 911 emergency dispatch center in Southern California. I witnessed firsthand the dedication and devotion of our firefighters when someone was truly in need. Firefighters as a group may indeed be tough guys, but I have to believe there were a lot of tears of joy shed over this act of caring and kindness. Wish I could have been there!

John P. – Miami, OK adds: People helping people – The world needs a lot more of this. Not only did the NY Volunteer Firefighters help their Canadian brothers, think of the help provided to people needing the services of the firefighters then, now, and in the future. Great Job all around!

Every Step Of The Way

Small acts of kindness can lead to lifelong opportunities.

jinamarie Gallo shares: I had a similar thing happen to me. A few years ago, I went to a check cashing store and saw the clerk was counting last night’s deposits for the bank drop. She wasn’t allowed to keep the doors closed and locked while in the process. Worrying about her safety, I stood outside until she was finished and had potential customers stay outside until she was done. I didn’t think much of it. It was just part of my nature to be kind to others. A year after that, I had knee surgery and was put into a Nursing Home for recovery. I noticed a woman who looked familiar to me working there. After a couple of days we both placed where we knew each other. She told me how grateful she was for my kind act and never forgot it telling her family and friends about this ‘wonderful’ person and what she did. She stated she was so happy she could return the favor and treated me like royalty while I was there. I never wanted for anything. She acted like she was my personal health aide and made my stay there pleasant and comfortable. I never believed that ‘whatever goes around comes around’ until that day. She turned a scary experience into one of peace, happiness and loving care.

Annette Naish says: We reap what we sow. This is what Heroic Stories is all about.

A lonely girl discovers her creative side from the encouragements of a friend.

Mary in GA says: I’m the author of this story – Barb & I are still very good friends even though we live several states away from each other. She is still as generous and caring as she was 30+ years ago, still positively impacting other peoples’ lives. I don’t know if she subscribes to HS, but she has always been a “co-conspirator to make the world a better place.” ~Mary

I love hearing updates to the stories from our authors, such as in Positive Reverberations… For Decades.

Remember: spread the word – share HeroicStories with a friend, find us on Facebook, and above all, look for the good all around you – it’s hiding in plain sight.

Leo A. Notenboom
Publisher, HeroicStories.org
“Co-Conspirator to make the world a better place”