About 10 years ago I taught a group of children to sail. They were bright, enthusiastic and as keen to enjoy life as any other child. All however, had a serious disability. Three were in wheelchairs, paralyzed from the waist down. One was nearly blind and had a deformity of his right arm. Two were able to walk with difficulty, afflicted with Cerebral palsy.

The seventh little boy I will never forget. I will call him Matthew. He too had cerebral palsy and was very badly afflicted. His hands and arms were both deformed from the disease and inactivity. His back was bent. His face was distorted and his legs did not work. Even his laughter was a tinkling cough, which racked his body. To speak, Matthew had the help of a letter board. Slowly, and with deliberate determination, he would point out with distorted hands, letter by letter, what he wanted to say. Sometimes he would try to talk. His voice was so distorted that even his constant caretaker could not understand most of his whispered growl. Yet he was always bright and cheerful and loved to try everything his classmates were doing, both in the boat and in the classroom. 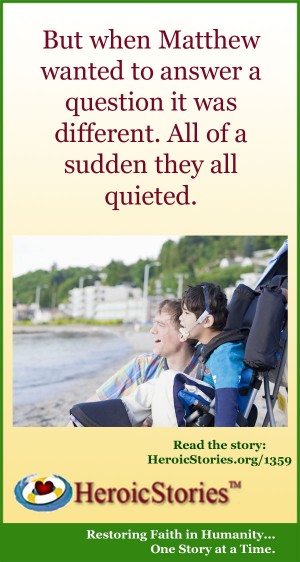 I loved my time with them; they were always so cheerful and full of life. They learnt fast and most of all enjoyed every minute of the classes. But despite all that I was the one who learned the greatest lesson. One day the sailing centre was assailed by a storm. The wind howled and the rain came down in torrents. Rather than cancel the session we decided to work in a classroom. All the children joined in. Just like other children they all wanted to answer the questions I asked. It was important to get them all involved. I would ask questions of the quieter children to draw them out too.

Often they would loudly interrupt each other, trying to get an answer in before one of the others. But when Matthew wanted to answer a question it was different. All of a sudden they all quieted. Matthew whispered and gesticulated at his board. They waited. Matthew struggled with dogged persistence until the answer was spelled out. Then, if I did not understand, one of the other children would work with him until the answer was clear. When Matthew had answered his question the children were, almost magically, transformed back into a rabble of noisy and enthusiastic children.

All of these children were heroes in their own way. But the tolerance they afforded to Matthew with his most severe disabilities was inspirational. At just fourteen years old, these disabled children had learned to afford care, respect and help to someone less fortunate than themselves. If only the rest of the world were able to learn the same lessons. Bigotry, violence and intolerance would be gone.