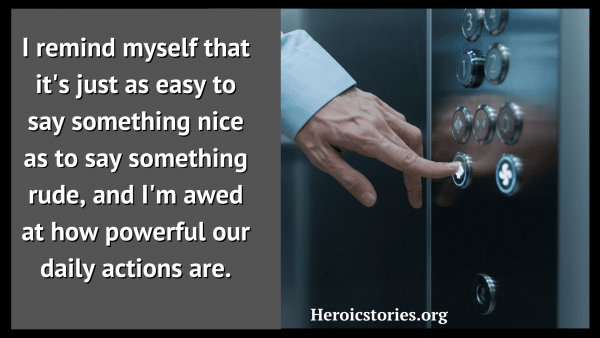 A few years ago, while working downtown at our company’s headquarters, I met a man I’ll call Martin. At the time, the company was downsizing. Again. Reducing the work force over six years caused the stock to go up, but it often had the opposite effect on morale.

I’m a morning person and start my work day around 6:30 a.m. Almost every morning, I saw Martin on the elevator. We were usually the only people there, so I made polite conversation as we rode to the 15th floor. We speculated on the weather or inquired about each other’s weekend. Some days, I saw him in the company cafeteria. Some days, we left work at the same time, and I chatted with him and others in the elevator.

About six months into our daily elevator chats, Martin came to my office and asked if I had a minute. Though we worked on the same floor, I’m sure he had to search to find me. I invited him to sit down. He said, “I wanted to come say goodbye. The company has let me go, and today will be my last day.”

I didn’t know what to say. Though I was too familiar with saying goodbye to co-workers, it was never easy. Honestly, I usually ignored the event because I felt awkward and at a loss for words. I told him I was sorry and asked if there was anything I could do. He said, “No, I’ll be fine, I just wanted to take the time to thank you.” I was confused. He explained that our daily talks had meant a lot to him.

Martin was a short, middle-aged man with a glandular problem. He was obese, used a cane to help maneuver, and was painfully shy. He thanked me not only for chatting with him in the mornings, but for speaking directly to him and others on the elevator, and for telling him a quick joke in the crowded cafeteria. It seems that no one had ever been his friend before — or if so, they were standoffish to him in public.

He said he didn’t want to take up much of my time as he knew I was busy, and he needed to pack his personal things. He had tears in his eyes as he shook my hand and left.

I’ve never seen him since, but I imagine he’s doing well. Meeting Martin changed my life. Now when I’m in a hurry or have a bad day, I try extra hard to speak kindly to those around me. I remind myself that it’s just as easy to say something nice as to say something rude, and I’m awed at how powerful our daily actions are.

12 thoughts on “My Elevator Friend”